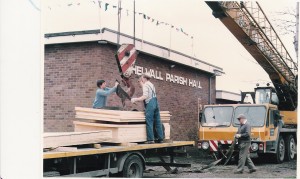 Thelwall Parish Hall was built in 1976 by the local people of Thelwall.  When it was decided that a new Hall needed to be built, a big fund raising event was held which raised £7,000. The estimates for completing the work were around £30,000 and the Church had very little reserves, but after a prayer meeting it was decided to build ‘in faith’! A loan of £6,000 was taken out from the diocese to allow the build to take place. A small group made up of Albert Yeamans, Tom Hatton, Derek Smith and Bob Smythe met to make plans, and were joined by Harold Potter, Ron Christie and Harry Tickle. 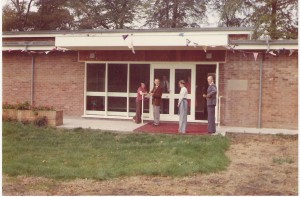 The shell of the Hall was built by Cliff Mac Builders and after that volunteers from the community completed the rest of the work. Den Jones and Don Mottershead did the electrics, Peter Barlow did the plumbing and countless others did the many other jobs needed to complete the build.

Even the materials were largely contributed by volunteers. The Bridgewater Players built the stage and provided the stage curtains, Mrs Underhill provided the other curtains. Bob Cherry, the Treasurer, gave £2,000 which bought the tables and chairs – which were only recently replaced!

The kitchen was donated, and New World donated two blemished cookers for free. The wood floor, toilet fitings and doors were all heavily discounted – Tom Hatton got the deal on the doors and then brought them home on the top of his car. The new incarnation of Thelwall Parish Hall was formally opened on October 2nd 1976 by the Right Rev Ronald Brown, Bishop of Birkenhead. The chairs and tables in the pictures were purchased in 1976 from a kind donation of £2,000 from Bob Cherry. The chairs were replaced in 2009 and the tables are now being replaced in 2011 – so they certainly earned their keep!

Theme: Illdy. © Copyright 2018. All Rights Reserved. Made in Warrington.